We are currently working on a bryophyte survey of Widdybank Fell in Upper Teesdale. The site is roughly 2km x 3km with a low point at about 380m asl. and a high point at 527m asl. The habitats include blanket bog, cliffs & screes, calcareous flushes & sikes and calcareous grassland.

For such an interesting site, there are surprisingly few records from the last 50 years. The last comprehensive survey was in 1999. 27 of the rare species have not been recorded there in the past 40 years, so one of the main aims of this survey will be to try to re-find as many of those as possible. 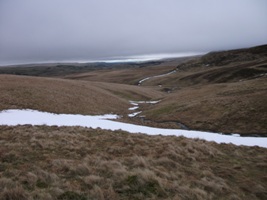 Looks cold doesn't it! Did the first two days surveying on 17th & 18th Feb and found 125 species so far. There were some quite big snowbeds still lying around and we have had more snow since. Areas where snow lies late are often interesting for bryophytes, so I will have to wait a bit before going back.

To discuss your requirements or receive a copy of our experience schedule and C.V.s please contact us at: